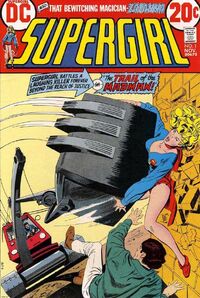 Vol 1: November 1972 – Sep/Oct 1974
Supergirl (Volume 1) was published from November of 1972 until October of 1974 spanning a total of ten issues. The series was published on a bi-monthly schedule with a six month hiatus in 1974 between issues number 9 and 10. The title featured the Pre-Crisis Supergirl Kara Zor-El, and often included back-up stories featuring Zatanna and Hawkman. After the final issue, Supergirl’s, Lois Lane’s and Jimmy Olsen’s series were merged in the Superman Family Vol 1.
Vol 2: November 1982 – September 1984
Supergirl (Volume 2) was published from November of 1982 until September of 1984, spanning a total of 23 issues. The series was initially entitled, the Daring New Adventures of Supergirl, but shortened the title to simply, Supergirl, with issue #13. This was the last regular comic series to feature the Pre-Crisis Kara Zor-El as Supergirl.
Fomerly her adventures had been published in Action Comics Vol 1, Adventure Comics Vol 1, Supergirl Vol 1 and Superman Family Vol 1. DC planned to launch a new magazine called DC Double Comics featuring Supergirl and Superboy, but it didn’t come to pass. So, when Supergirl (Volume 2) was cancelled, there wasn’t a Supergirl monthly strip on the stands for the first time since 1959.
In these tales, Supergirl relocates from New York City to Chicago, meets new friends and allies… and new enemies, such like Psi, The Gang, Reactron or Blackstarr! Plus, while battling the evil foursome known as the Gang, Kara stumbles upon a conspiracy that threatens all of her new hometown and leads her to ally herself with the Doom Patrol.
Vol 3: February 1994 – May 1994
Supergirl (Volume 3) was a four issue limited series published in 1994. It is the first comic series to feature the Post-Crisis Supergirl, sometimes known as Matrix. Matrix first came to prominence as the modern Supergirl in the “Return of Supergirl” storyline running through Superman #21-22 and Adventures of Superman #443-444. This mini-series resolves a year’s worth of subplots revolving around Supergirl’s relationship with billionaire, Lex Luthor.
Vol 4: September 1996 – May 2003
Supergirl (Volume 4) was written by Peter David, and was published by DC Comics from September of 1996 until May of 2003. The series spanned 80 issues, and included 2 annuals and a One Million issue. This series featured a Supergirl that was a fusion of two different characters – the Matrix Supergirl and Linda Lee Danvers.
Vol 5: October 2005 – October 2011
Supergirl (Volume 5) was published by DC Comics from October of 2005 until October of 2011. The series spanned 67 issues, and included 2 annuals. This series features the modern Kryptonian Supergirl, Kara Zor-El, who first appeared in the Superman/Batman: The Supergirl from Krypton storyline in the pages of Superman/Batman issues #8–13.
Vol 6: November 2011 – May 2015
Supergirl (Volume 6) was one of the comic titles in the first wave of The New 52 ongoing series to be published after Flashpoint. It was published from November of 2011 until May of 2015, spanning a total of forty issues and two specials. It featured a new iteration of Supergirl, Kara Zor-El of Prime Earth.
After spending several decades in suspended animation as her spacecraft orbited the Sun, Kara Zor-El lands on Siberia. Upon awakening, the Last Daughter of Krypton finds out her family and her world are gone and she has been stranded in an alien world, full of hostile people who use primitive technology and talk strange languages. Alone, confused and still grieving, Kara will have to learn how to move past her loss and adapt to her new life and role.
Vol 7: 2016
Supergirl (Volume 7) is one of many series released as part of DC Rebirth, a publishing initiative by DC Comics that saw many series relaunched. Kara lost her powers at the end of her previous comic series. Her attempt to regain them sets a new status quo for the character, one that is more reflective of the Supergirl TV series airing at the time of its publication.
In 2018, the book suffered a brief hiatus as a consequence of DC restructuring the Superman line. Shortly after Steve Orlando’s run ending up with #20 it was announced Supergirl’s book would return with October 2018’s Supergirl #21, helmed by Marc Andreyko and Kevin Maguire.