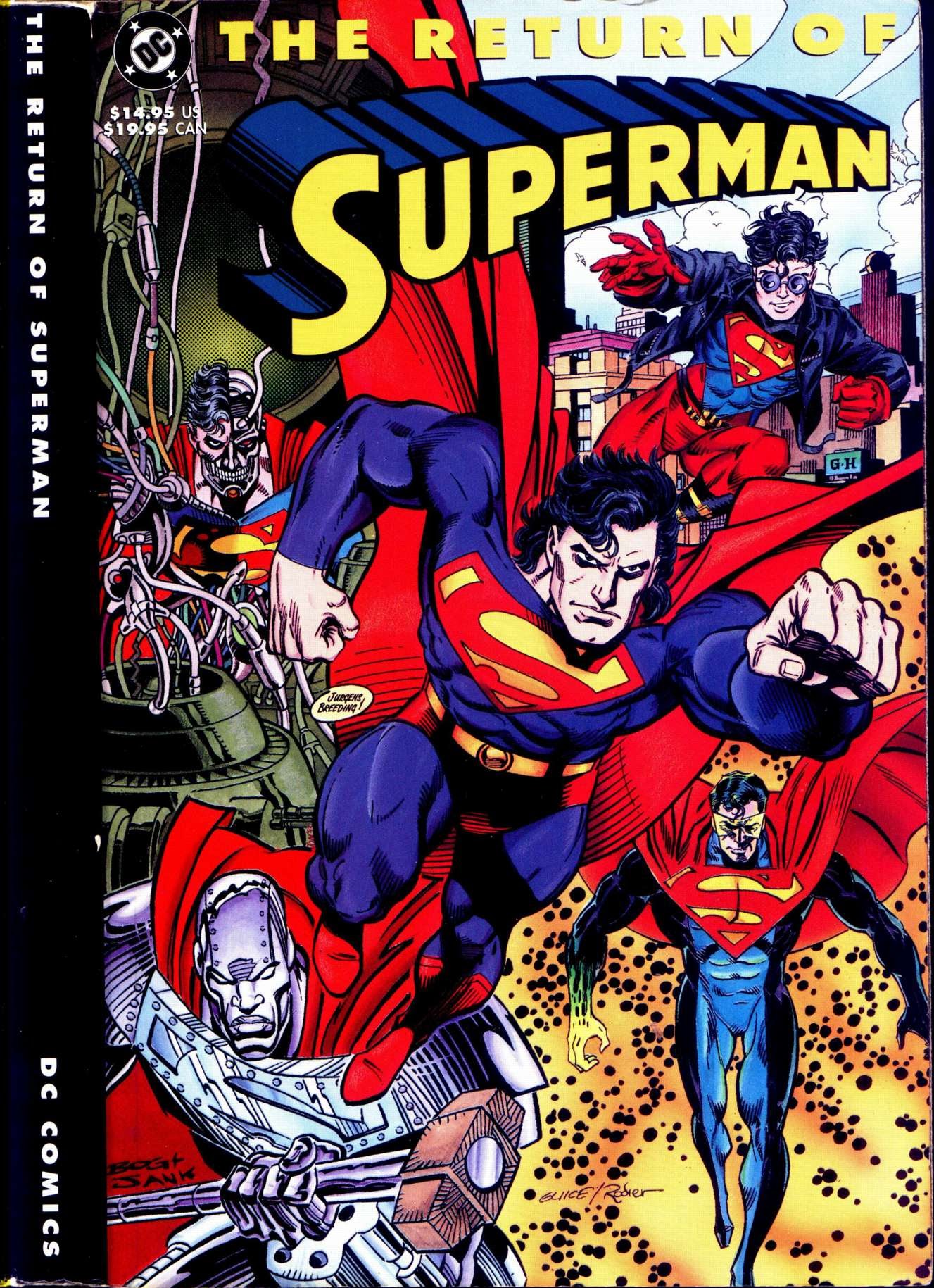 Superman: The Return of Superman

Vol 1: 1993
A collection of the Return of Superman story line.
After the death and funeral of Superman, multiple Supermen start appearing in Metropolis, all of them claiming to be the Man of Steel (well, not all of them, but we’ll get to that later). There’s Cyborg Superman, Superboy, Steel, and Eradicator. While the people aren’t sure who is who, we quickly find out that Superboy is a clone of Superman, Steel is just a man trying to honor Metropolis’s fallen hero, Eradicator is an age-old Kryptonian being sent to save the last of the Kryptonians, and Cyborg-Superman has something more sinister up his sleeve, as he works with Mongul to reshape Coast City in his image. The reader quickly comes to find out that the real Superman is back in action. After a long battle and Eradictor sacrificing himself, both Cyborg Superman and Mongul are defeated, and the real Superman reclaims his thrown. Everything is back to normal once again.
Vol 2: April 5 2016
As an unknown alien warship, unnoticed and unchallenged, approaches the Earth, the world still doesn’t know who if any of the four replacement Supermen is the real Man of Steel. Though each of them have their own claim to the title, two are beginning to show their true colors when they begin to battle the others for supremacy. Unknown to all, the true Superman recently restored by a Kryptonian regeneration matrix begins to plot his homecoming. But will he be too late to save Coast City from the clutches of a traitor and the return of the alien warlord, Mongul?
Join DAN JURGENS (SUPERMAN: LOIS & CLARK), LOUISE SIMONSON (SUPERMAN: THE MAN OF STEEL) and others as Superman reclaims his rightful place as Earth’s greatest hero! The fourth of four volumes chronicling the epic saga of the Death and Return of Superman, collecting ACTION COMICS #689-692, ACTION COMICS ANNUAL #5, ADVENTURES OF SUPERMAN #503-505, ADVENTURES OF SUPERMAN ANNUAL #5, GREEN LANTERN #46, SUPERMAN #80-83 and SUPERMAN: THE MAN OF STEEL #24-26!