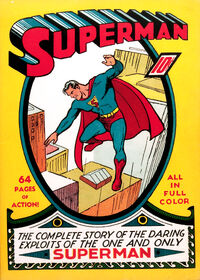 Vol 1: Summer 1939 – October 2011
Superman was the title of the monthly comic book featuring Superman. It was in publication from 1939 to 1986, ending at issue #423. The series was retitled Adventures of Superman (Volume 1) starting with issue #424 in 1987. Superman (Volume 2) also began in 1987 with issue #1.
In 2006, a restructuring of the entire DC Comics line saw Superman Vol 2 discontinued. The last issue of Adventures of Superman was #649; it was once again titled Superman and continued the numbering from #650. Both the initial run of Superman Vol 1 and Superman Vol 2 had 12 annuals.
Vol 2: January 1987 – April 2006
Superman (Volume 2) was the first ongoing Superman title to take place in the revised continuity following the events depicted in the Crisis on Infinite Earths limited series. After the Crisis, the Superman family of titles endured a major change in format. World’s Finest and DC Comics Presents ceased publication, Action Comics adopted a team-up format (filling the former role of DC Comics Presents), and Superman (Volume 1) changed its title to the Adventures of Superman.
Superman (Volume 2) began its publishing history in 1987 and followed in the footsteps of the Man of Steel limited series – a series that effectively rewrote the history of Superman.
For the first several years, the stories contained in Superman (Volume 2) were self-contained, occasionally crossing over into other comic titles depending upon the story-arc. By issue #50, Superman stories began to follow a chapter-based continuity, with storylines moving from one title to the next. In order to provide an easily accessible reading order for consumers, the DC editorial staff began using a secondary numbering system displayed on the cover of each issue. These continuity markers were informally known as the “triangle” numbers, and were recycled at the end of each publishing year. Every Superman comic book published from the mid to late 1990s (including Annuals and specials) possessed a sequential chapter number on the cover. Eventually, writers began containing their storylines to single titles again and the DC editors ceased providing the chapter markers on the covers.
The final issue of Superman (Volume 2) was #226 which shipped on February 8, 2006. Afterwards, as part of DC’s One Year Later event, this volume ended, and Adventures of Superman returned to its original status as Superman (Volume 1) beginning with issue #650.
Vol 3: November 2011
The new adventures of Superman begin here! What is The Man of Steel’s startling new status quo? How does it affect Lois Lane and The Daily Planet? There’s no time for answers now, because Superman must stop a monstrous threat to Metropolis – one that he somehow is the cause of!
Vol 4: June 15, 2016
The Last Son of Krypton must decide whether to help his young son use his new and rapidly increasing abilities, or hide them from the world.
THE CREATORS: The team supreme that brought fans the adventures of Damian Wayne in BATMAN AND ROBIN returns for the adventures of Superman and his offspring.
Vol 5: July 11 2018
A bold new chapter for the greatest superhero of all time begins here as the superstar team of writer Brian Michael Bendis and artist Ivan Reis begin their run on the all-new SUPERMAN! The fallout from the Man of Steel miniseries has Clark Kent looking at the world through new eyes… with new ideas about what Superman could and should do for the city of Metropolis and the planet Earth.