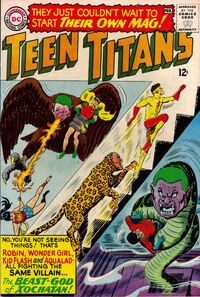 Vol 1: February 1966 – February 1978
Teen Titans Robin, Wonder Girl, Aqualad and Kid Flash face off against their first opponent in the premiere issue of their very own series: the Beast-God Xochatan!
Vol 2: October 1996 – September 1998
A sinister experiment by an alien race called the H’San Natall reaches its climax as four human teenagers all gain met-human powers at the same time. The recently de-aged Ray Palmer (a,k.a. the Atom) finds himself in a position to break the aliens’ hold on them and forge them into a team that can stand together against the H’San Natall.
Along with his returned youth though, Ray’s also lost a lot of his former skills and memories though, so he might actually need this new Teen Titans team just as much as they need him.
Vol 3: September 2003 – October 2011
Robin, Superboy, Wonder Girl,and Impulse are invited to the Teen Titans. Although Impulse wears the costume of Kid Flash on the cover of this book he does not wear it yet in the book, Raven is also seen on the cover but not in the book
Vol 4: November 2011 – June 2014
The Teen Titans are an organization of young vigilantes banded together to fight crime. Beginning as a group of side-kicks looking to distinguish themselves from their mentors, they would go on to expand into a world-wide establishment. Their original founders were Aqualad, Kid Flash, Robin, Speedy and Wonder Girl although their membership would expand greatly over the years. They have also used the names New Teen Titans, New Titans and the Titans. The Teen Titans were created by Bob Haney and Bruno Premiani, first appearing in Brave and the Bold
Vol 5: September 2014 – November 2016
Red Robin, Wonder Girl, Raven, Bunker and Beast Boy step out of the shadows of the adult heroes of the DC Universe to offer bold, exciting and sometime dangerous ideas on how to protect a world full of superpowered teenagers – any one of whom could be the next heroic figure or major villain!
Vol 6: 26 October 2016
“Damian Knows Best” part one! Now that Damian has “summoned” the Teen Titans, the tyrannical teen reveals his master plan! But a great evil from Damian’s past is lurking around the corner, ready to strike at the team’s newest leader and destroy the new Teen Titans before they even begin!