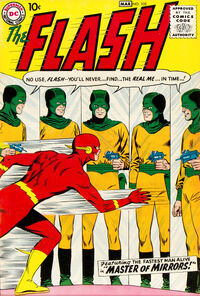 Vol 1: March 1959 –
The Flash (Volume 1) is an ongoing series published by DC Comics. It has primarily starred Barry Allen, the Silver Age Flash. The series was originally published for 246 issues from February/March of 1959 until October 1985 (#105-#350). The numbering of the series picks up from Flash Comics, which ended with issue #104 in 1949. In 2020, the series was revived with legacy numbering beginning with #750.
Vol 2: June 1987 – February 2009
The second volume of the series is a long-running hit in its own right. This volume follows the adventures of Wally West in Keystone City. Wally, having picked up the mantle of the Flash after the passing of his mentor Barry Allen, has made startling discoveries about the nature of his powers and the history of the fastest men alive. Recently Wally was granted the wish to have everyone in the world forget his secret identity in hopes it would keep his wife Linda safe from his enemies.
Vol 3: June 2010 – July 2011
A Brightest Day tie-in! Get in on the ground floor of DC’s next epic in the making! The Flash races out of Blackest Night and into his own monthly title as the all-new adventures of The Fastest Man Alive start with “Case One: The Dastardly Death of the Rogues!” Barry Allen runs back to his life in Central City, but when one of the Rogues turns up murdered under mysterious circumstances, it’s up to The Flash to not only solve this bizarre crime, but protect those that are still targeted by the elusive killer. Plus, don’t miss a peek into the future of the Flash universe in this special, extra-sized starting point issue!
Vol 4: November 2011
The Flash knows he can’t be everywhere at once, but what happens when he faces an all-new villain who really can! As if that’s not bad enough, this villain is a close friend!
Vol 5: June 22 2016
A new storm brews over Central City and disproves the old adage about lightning never, well…you know. Just as Barry begins to feel overwhelmed fighting crime, a new speedster debuts—but just where did this amazing new friend come from?
FLASH FACT: “2016 is the 60th anniversary of Barry Allen becoming The Flash, and it’s a privilege to be a part of it,” says writer Joshua Williamson. “‘The Return of Barry Allen’ in FLASH #79 [1993] is one of my favorite comics of all time. It’s where I became a Flash fan for life.”