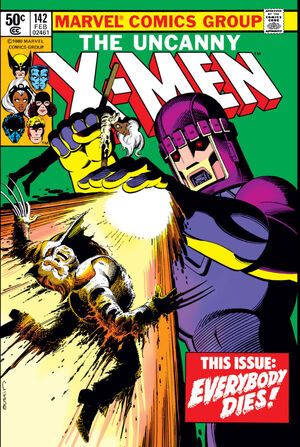 Vol 1: 1981 – 2011
Will the X-Men fight to see another day? And how does IceMan fit into all this? Find out in the first ever appearance of the mutant team!
Vol 2: January 2012 – December 2012
Schism is over and Regenesis is here. Uncanny X-Men gets a new start courtesy of Kieron Gillen and Carlos Pacheco. Under Cyclops leadership, the team is going in a slightly new direction but they may not all survive to see how it works out.
Vol 3: April 2013 – September 2015
The true flagship book of the X-Men returns. In the wake of the Phoenix, the world has changed and is torn on exactly what Cyclops and his team of X-Men are – visionary revolutionaries or dangerous terrorists? Whatever the truth, Cyclops, Emma Frost, Magneto, and Magik are out in the world gathering up new mutants and redefining the name Uncanny X-Men.
Vol 4: March 2016
In a world that’s never hated or feared mutants more, there is only one constant: BIGGER THREATS REQUIRE MORE THREATENING X-MEN. Refusing to accept one more mutant death, the most ruthless mutants on Earth have banded together to proactively mow down their enemies. But with a team populated by relentless killers, one question applies above all others: Can they stay away from each other’s throats long enough to sever their targets’?
Vol 5: January 2019
Featuring action-packed extras including a Cover Gallery, Script, Inked And Color Pages and Character Designs! THE CHILDREN OF THE ATOM ARE BACK! New ongoing series kicking off with a 10-part weekly epic, the flagship X-Men series that started it all is back and better than ever! Starting with a mysterious and tragic disappearance, the X-Men are drawn into what might be…their final adventure?! X-Fan favorite writers Ed Brisson (EXTERMINATION), Matthew Rosenberg (PHOENIX RESURRECTION) and Kelly Thompson (MR. & MRS. X) and all-star artists Mahmud Asrar (X-MEN RED), R.B. Silva (X-MEN BLUE), Yildiray Cinar (WEAPON X) and Pere Pérez (ROGUE AND GAMBIT) join forces to bring you… X-MEN DISASSEMBLED?!