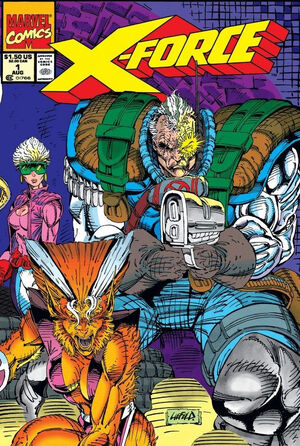 Vol 1: August 1991 – August 2002
Cable and his X-Force (Domino, Shatterstar, Warpath, Cannonball, Boom Boom, and Feral) attempt to take down the mutant terrorist group known as the Mutant Liberation Front. X-Force breaks into the MLF’s base and take out the guards with little effort. Next, X-Force is confronted by Forearm, Kamikaze, Wildside, and Reaper. Shatterstar cuts off Reaper’s left hand, Warpath knocks out Forearm, and Feral breaks Wildside’s jaw. Stryfe rigs the base to blow and escapes with the injured MLF via Zero’s teleport. Vol 2: January 2004 – March 2005
It’s X-Men: ReLoad Wave 2! Rob Liefeld and Fabian Nicieza return to the title they made famous—X-FORCE! Cable, Domino, Cannonball, Shatterstar, Warpath and all the rest return in this new series! New heroes, new villains, and big action… X-Force just the way you want it! Vol 3: April 2008 – September 2010
There are lines that the X-Men have sworn never to cross. But after the shocking events of “Messiah Complex,” Cyclops realizes that some enemies need to be dealt with permanently… and the X-Men can never know about it. And that is where the X-Force begins. Vol 4: April 2014 – April 2015
Almost every sovereign state in the Marvel Universe makes use of sanctioned superhumans to protect national interests and pursue a covert agenda. The United States has the Secret Avengers. The United Kingdom has MI13. And mutantkind has X-FORCE. In this dirty, secret, no-holds-barred, deadly game of superhuman black ops, veteran X-Man Cable and his team will spy, torture, and kill to ensure that the mutant race not only has a place in the world…but also a stake in it. Vol 5: February 2019
FROM THE ASHES OF EXTERMINATION! Cable is dead…and now, the original X-Force team of Domino, Cannonball, Shatterstar, Boom Boom and Warpath. must hunt down the murderer of their former leader! The mutant militia are hot for blood… but when their target is the time-traveling younger version of their fallen mentor, is there a line they absolutely cannot cross? And what does Deathlok have to do with all of it? From Ed Brisson (EXTERMINATION, OLD MAN LOGAN) and Dylan Burnett (COSMIC GHOST RIDER), comes an all-new, high-octane mutant adventure! A reckoning will come! Vol 6: November 6 2019
Featuring action-packed extras including a Cover Gallery, Script, Inked and Color Pages and more!
THE HIGH PRICE OF A NEW DAWN! X-Force is the CIA of the mutant world—one half intelligence branch, one half special ops. Beast, Jean Grey and Sage on one side, Wolverine, Kid Omega and Domino on the other. In a perfect world, there would be no need for an X-Force. We’re not there…yet.