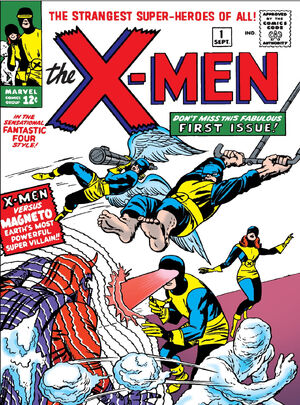 Vol 1: 1963 – 1981
Will the X-Men fight to see another day? And how does IceMan fit into all this? Find out in the first ever appearance of the mutant team!
Vol 2: October 1991 – March 2008
It’s the X-Men vs. Magneto, Master of Magnetism! The X-Men’s oldest enemy is back and it’s going to take everyone in the X-Men have to bring him down. A Marvel classic from Chris Claremont and Jim Lee!
Vol 3: September 2010 – April 2013
The X-Men battle the vampire nations and team up with Blade, and then the team of Storm, Gambit, Emma Frost, and Wolverine returning to New York where they team up with Spider-Man to battle the Lizard and Dark Beast in the sewers of Manhattan.
Vol 4: July 2013 – June 2015
Because you demanded it! The X-Women finally get their own book, from critically acclaimed superstars Brian Wood (X-MEN, ULTIMATE X-MEN, DMZ, The Massive) and Olivier Coipel (AVX, HOUSE OF M, THOR)! An old enemy shows up at the X-Men’s door, seeking asylum from an ancient evil come back to earth. Meanwhile, Jubilee has come home, and she’s brought with her an orphaned baby who might hold the key to the earth’s survival… or its destruction. Against a backdrop of what seems like an alien invasion and an eons-spanning war between brother and sister, Storm steps up and puts together a team to protect the child and stop a new threat that could destroy all life on earth!
Vol 5: October 16 2019
DAWN OF X! The X-Men find themselves in a whole new world of possibility… and things have never been better! Jonathan Hickman (HOUSE OF X, POWERS OF X, SECRET WARS) and superstar artist Leinil Yu (NEW AVENGERS, CAPTAIN AMERICA) reveal the saga of Cyclops and his hand-picked squad of mutant powerhouses!
Vol 6: July 7 2021
THESE X-MEN ARE… FEARLESS! The heroes of Krakoa are here to save the planet! Things might be complicated between the nation of Krakoa and the rest of the world, but to the X-MEN, things are simple — you do what’s right, you protect those who need protecting and you save the world we all share. Cyclops, Marvel Girl, Sunfire, Rogue, Wolverine, Synch and Polaris are the chosen champions of mutantkind, and they will not shrink from any battle for their home planet. Writer Gerry Duggan (MARAUDERS, DEADPOOL, UNCANNY AVENGERS) reteams with superstar artist Pepe Larraz (HOUSE OF X, X OF SWORDS, UNCANNY AVENGERS) to chart the course of the X-Men in a world of the Reign of X!